howwwzattt... of arrogant and being stupid...

I owned several red t'shirts, in fact I love the color red. I was in the red house during my primary school. Nearing the sports day, all of us bought a white singlet for boys and t'shirt for girls and later on the house teachers would set up a huge periuk on the fire, put water and dyes according to the house color and lastly would put in our singlets and t'shirt into it. From 1979 until 1984, we never wore a proper attire for our sport houses like what we have today. Those were the good old days.

When I was sent to a boarding school in Taiping, again fate placed me in the red house, which is known as Garuda. Not a powerful house during my time, we were more relaxed and not that competitive if compare to the other houses.

And now, red is back but with a different twist. Prior to the Bersih4 rally, some kukudus decided to wear red and do some silat/parang/breaking bricks with their heads as if the Bersih4 rally is some kind of fighting rally, Chinese versus Malay or the other way around. But why with the provoking demonstration? The yellow was seeking answers, and that leaves the red as the protector of not giving answers? 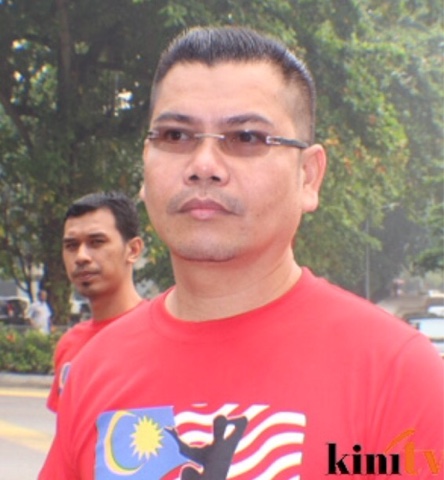 Read here if you want to know what the chief of kukudus was saying.

On this coming Hari Malaysia, the head of kukudus has invited everybody to join them but at first it was only for the Malays. Realizing that they made a bungling mistake in the beginning by portraying themselves as racist, they backtracked by inviting the Chinese and Indian to join them.

Now the thing is, what cause are they championing for? To defend Najib? Defending the Malays? From what? I don't see any harms except from our own doings.

They are doing it just for the sake of doing it. So annoying...
Posted by Saudagar Mimpi at 01:18