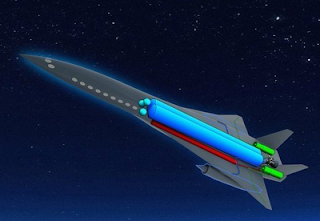 The group says that jet hypersonic jet that is twice the speed of Concorde. The jet will fly above the atmosphere and use biofuel to take off from a runway initially. This will allow the plane to avoid the supersonic boom and pollution seen in concede.

It is not a Concorde but it looks like a Concorde, showing that aerodynamics of the 1960s were very smart.EADS officials said that the jet will not be operational until around 2040. . The plane is being developed in collaboration with Japan and will be able to carry 50-100 passengers at a time.

The jet will use Ramjet engines, which power missiles and will cruise at altitudes of 32km and travel at about four times the speed of sound. The project, known as ZEHST (zero emission high speed transport), is being developed with the help from EADS' space arm Astrium.

According to a report, the jet will use a mix of biofuel, hydrogen and water for its flight. EADS said that it expects the travelers to pay about £5000 for a return trip from London to New York.