howwwzattt... of losing and acceptance... 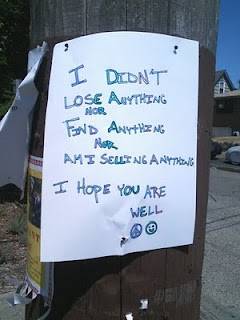 Lost his cell phone last night and to think about it, he didn’t even know how he lost it. He never lost his phone before except for a time when he dropped it from the upper deck of a 747 onto the hangar floor an equivalent of a 2 storey building and smashed to pieces. Only the sim card survived that short encounter with the gravitational pull.
But last night was different, he actually lost it. It was not an expensive one only a Nokia E72 but he loves the phone so much and unknowingly he hopes those who found it would return it back to him. Tried to call his number but was diverted to the voicemail which mean somebody had found it and decided to keep the phone but not the sim card.
He wasn’t too sure if the phone was any good to its new owner since he had put 2 passwords for the phone to works but in this era of technology he doubted that will stay long before any Low Yat techies could crack his passkeys anyway.
He still hasn’t make up his mind whether to get the same replacement or a BB instead and whichever way he has to wait for the next pay check first... sigh...
Posted by Saudagar Mimpi at 21:56

nah, way out of my budget. will have to go to celcom office in the morning for my sim replacement first... :-(

mus, sorry to hear abt your phone ... it's a hassle to reprogram all those hundreds or thousands of contacts ...