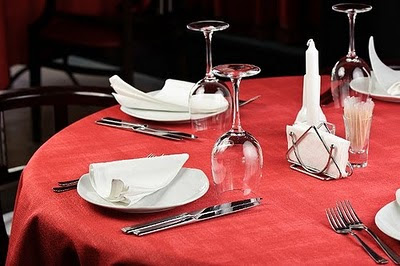 I couldn't help myself to share you this piece taken from Reader's Digest Sept. 2009 edition. Some of us were not that fortunate to savour what others have...
I'd reserved a table for my wife and me overlooking the ocean at one of my favourite restaurants in Newcastle, Australia. The restaurant was only a quarter full when we got there. A couple in their 30s were seated about three tables away.
There was a subtle awkwardness in their manner that caught my attention. I've always been sensitive to the feelings and energy levels of other people. I got the immediate impression that this couple could rarely afford to eat out.
At first I ignored the thought, but it kept popping back into my head.
I began to feel a strange urge to pay for their meals. I wasn't wealthy, but I could afford it. So I followed my inclination and approached the maitre d' to pay their bill. I was told that they had finished their courses and might still order coffees, but so far the bill came to $75.
When she asked why I was paying their bill, I felt a little self-conscious as I tried to encapsulate my feelings.
I finally replied, "When I saw that couple I got the feeling that they had to struggle to get what they've got. So i decided to pay their bill. But I don't want you to tell them who paid it or why. Just treat it as a gift."
When the couple went to settle their bill a muffled exclaimation could be heard throughout the restaurant. Later I asked the maitre d' what happened.
She said the young woman broke down into tears and exclaimed, "Nothing like this has ever happened to us before. We've never won anything or been given anything. Things like this just don't happen to us." But it did happen.
Now whenever I think of the incident, it brings on a smile as I remember how once, through empathy and intuition, I felt a strong desire to give freely to another.