howwwzattt... the man who rewrites cricket history over and over again... 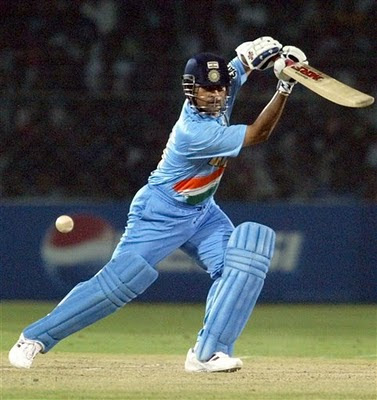 Sachin Tendulkar's story is the story of modern India, the India that 60 years after independence is emerging as a major power and producing iconic figures for whom the tag Indian is no longer a burden but an advertisement.
Last week The Little Master made another history became the first man to score a double 100 in a 50 overs match which he dedicated his achievement to India where cricket is the "religion" to the population.
Sir Donald Bradman (considered the greatest batsman in the game) shortly before his death anointed Tendulkar as his successor and Tendulkar regarded by his countrymen as a god-like figure where others were held in little regard and almost always considered venal and corrupt.
He started as a professional cricketer at the age of 15 which saw him scored a century on his first class debut (first Indian to do so) and at the age of 16 he made his test debut against their arch-rival Pakistan in 1989.
Last month he became the first batsman to pass the 13,000 Test runs mark and his 47 Test centuries are a record (Australia's Ricky Ponting next after him on the list with 39).
In ODI he has scored more runs than anybody - 17,598 runs and at 37, there is no talk of retirement and he plans to play in next year's World Cup.
He says: "I just keep it simple. Watch the ball and play it on merit."
They say: "You know genius when you see it. And let me tell you, Sachin is pure genius." - West Indies batting great Brian Lara.
**Source: theSun
Posted by Saudagar Mimpi at 17:52