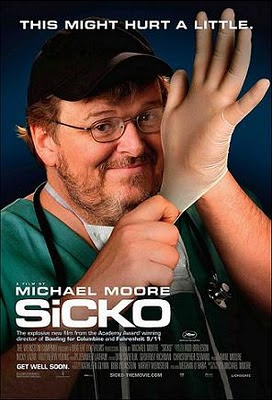 Had watched this docu-drama by Michael Moore on early morning the day before. It was really an eye opener on how such things were commercialized in the the land of freedom (read United States of America).
Like this statement made by one of their citizens; The government should fear and take care of their people instead of the other way around.
Imagine this. In France, the government will provide an assistant/nanny for free for four hours a day prior you gave birth.

In Cuba, the price of an inhaler (Ventolin I guess) is just about 5 cents compared in the US which is USD120.

All those cost were absorbed by the government that really care for the health being of their citizens though like Cuba, they were label as the enemy by the US.

Later on Michael Moore and a few of the US citizens that need medical attention but couldn't afford to pay took a boat ride to the Guantanamo Bay where the most secured and high tech prison located.

This prison has the most advance medical facility in the world and the irony was, they treated the most dangerous prisoners/criminals (according to them) just for free.

In France, Moore visits a hospital and interviews the head of obstetrics and gynaecology and a group of American expatriates. Moore rides with the "SOS Médecins", a 24-hour French medical service that provides house calls by physicians.
Moore discovers that the French government provides many social services, such as health care, public education (including universities), vacation and day care for $1 an hour and neonatal support that includes cooking, cleaning, and laundry services for new mothers. (more here)
I think if there are more re-runs on Astro, you guys should watch it.

Source from Astro & Wikipedia.
Posted by Saudagar Mimpi at 02:26