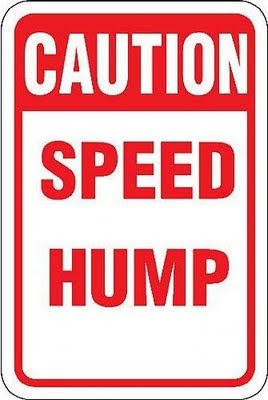 Since the opening of SkyPark T3 in Subang, traffics were a nightmare especially during the evening where everybody rushed home from work.

One of the contributing factors were, the numbers of housing estates surrounding the Kampung Melayu Subang such as Subang 2, Subang Mahsing, Puncak Alam, Kayangan Height, Sungai Buloh, Kota Damansara and many more.

The other factor was, speed humps. There were 3 of them if I’m not mistaken. These lead to traffic crawl as early from the BP petrol station until the last hump near the immigration office (former terminal 2).

It was a nightmare for me at least just to reach my workplace, inched my way from there onwards.

The authority had decided to remove all the humps last night and guess what, no more traffic crawl as of this evening.

It was a simple solution and I don’t know why it had taken these long for the geniuses with the local council to come up with the idea.

I praised the brain behind it.

Their characteristics
1. 3" tall by 12’ long in the direction of travel
2. Extend the entire width of the street
3. 12" painted reflective white stripes across
4. Spaced 250’-350’ apart
5. Designed to be driven comfortably at 30 kph
Advantages
1. Decrease average speed 10 – 20 kph
2. Sometimes can decrease the number of cars using the road but in our country it may be resulted to traffic congestion if placed in major road
3. Works 24 hours a day, 365 days a year
4. Cost is reasonable but once again may ballooned to tenfold figures if the works is to be sub-contracted to local contractors
Disadvantages
1. All drivers must drive over them; speeders and non-speeders
2. Traffic noise from: rapid braking, rapid accelerating, objects bouncing in truck beds
3. Drivers might drive "around" them, onto shoulders, sidewalks, or landscaped areas
4. Street sweepers may leave some dirt and debris residue at humps
5. Some rainwater may be retained
6. They are not aesthetic, some people object to their appearance

References were taken from City of Scotisdale
Posted by Saudagar Mimpi at 21:43