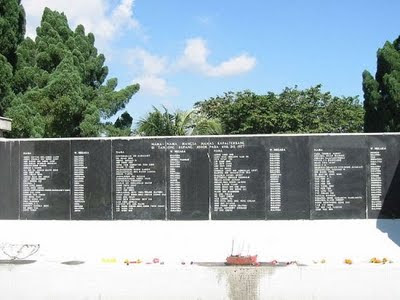 The memorial site is situated at Jalan Kebun Teh, Johor Bahru,
Malaysia. It is known as Tanjung Kupang Memorial. 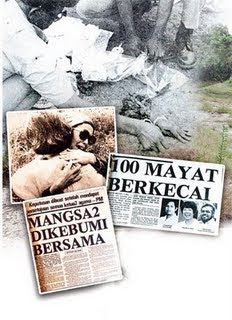 THE HISTORY
Malaysia Airlines Flight 653 (MH653), a Boeing 737-2H6 aircraft registered as 9M-MBD (delivered September 1972 as 9M-AQO), crashed at Tanjung Kupang, Johor, in Malaysia on the evening of 4 December 1977.
It was the first and deadliest fatal accident for Malaysia Airlines, with all 93 passengers and 7 crew killed instantly.
The flight was apparently hijacked as soon as it reached cruise altitude. The circumstances in which the hijacking and subsequent crash occurred remain unsolved. 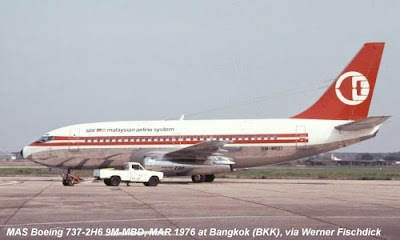 Sequence of Events
At approximately 1954 hours, while at an altitude of 4,000 feet over Batu Arang and descending toward Subang's Runway 33, captain G.K. Ganjoor reported an "unidentified hijacker" onboard to Subang Tower. The tower immediately notified the authorities, who made emergency preparations at the airport.

At 2015 hours, all communication with flight MH653 was lost.

At 2036 hours, the residents of Kampong Ladang, Tanjong Kupang in Johor reported hearing explosions and seeing burning wreckage in a swamp. The wreckage was later identified as Flight MH653. The plane hit the ground at a near-vertical angle at a very high speed. There were no survivors and not one recognizable body was found. 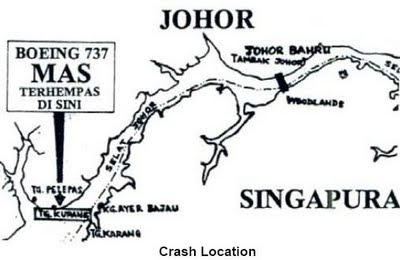 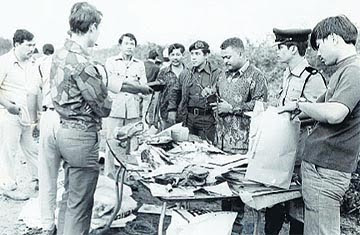 Aftermath
The aircraft cockpit voice recorder was recovered and the following was established:

After seizing control, at a point shortly before the crash, the offender locked himself in the cockpit with the two pilots. From the conversation, it appeared that all tension was gone, the hijacker talking amiably to the pilots. Suddenly, two gunshots occurred in rapid succession, followed a short time later by a third and final shot.

At this stage, the aircraft was on autopilot in a stable flight altitude. Noises suggestive of the cockpit door being broken into are heard, along with screaming and cursing.No noises are heard from within the cockpit to indicate any of the three occupants were conscious.

The autopilot disconnected, possibly due to a pitch input by someone entering the cockpit and trying to control the aircraft without knowing how to do it properly. An investigator speculated that someone pulled back on the column, causing a pitch up, done in such a fashion that positive feedback occurred; e.g., reaching over a pilot unsupported and falling back as the plane pitched up; i.e., a pilot-induced oscillation. This rapidly developed into a high amplitude phugoid oscillation, resulting in the near-vertical impact into the swamp.

The hijacker spoke with a Japanese accent. It has been claimed that the Japanese Red Army was responsible for the hijacking.

All recovered remains were x-rayed in an attempt to discover evidence of a projectile or weapon. No weapon or bullet was ever found. The remains of the victims were interred in a mass burial.
Taken from MAS Engineering & Maintenance Portal
Posted by Saudagar Mimpi at 16:45