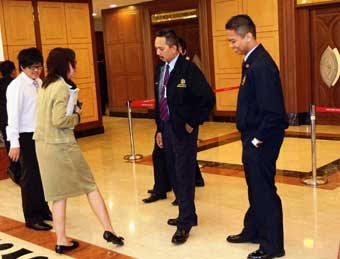 WHAT'S PERMISSIBLE?: Seputeh MP Teresa Kok showing her skirt length to two security officers at Parliament before entering the Dewan Rakyat. NST Pix by Mohd Yusni Ariffin Read more about the skirt issue here.
"They should be more concerned with security than enforcing dress code. They are more important things going on inside the Chambers," he said during a press conference amidst mounting criticisms from women reporters over the over zealousness of House security. 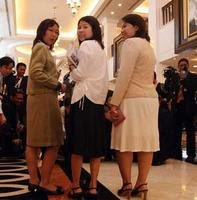 Seputeh MP Teresa Kok (left) with two journalists at Parliament
This was taken today from the NSTOnline. For once I came to a term with the minister on views and remarks he made after all these while.
Posted by Saudagar Mimpi at 17:37