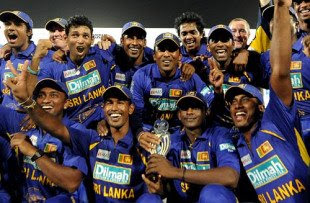 Eight years ago, in Sharjah, Sanath Jayasuriya scored a magnificent 189 before Sri Lanka's bowlers sent India tumbling to 54 all out, and a humiliating 245-run defeat. At Karachi's National Stadium, Jayasuriya, now 39, smashed another superb century before Ajantha Mendis, the mystery spinner still classed as a slow-medium bowler, bamboozled a highly rated batting line-up to finish with astonishing figures of 6 for 13.
Virender Sehwag's blistering early onslaught was rendered irrelevant as Sri Lanka stormed to a 100-run victory, retaining the Asia Cup and extending India's miserable record in tournament finals.
With Sehwag hammering an exhilarating 60 from just 35 balls, India had romped to 76 from just nine overs. Muttiah Muralitharan prefers not to bowl during the Powerplays, and it was to Mendis, who the Indians had never faced before, that Mahela Jayawardene turned as he sought to staunch the flow of runs.
Even he couldn't have predicted the impact that Mendis would have. Like a combine harvester scything through a field of corn, Mendis sliced through a line-up that has quite a reputation when it comes to playing spin. Sehwag charged his second delivery and watched helplessly as it drifted away from him. Kumar Sangakkara did the rest. Two balls later, Yuvraj Singh was utterly befuddled by one that skidded on. Suddenly, 274 appeared a long way away. 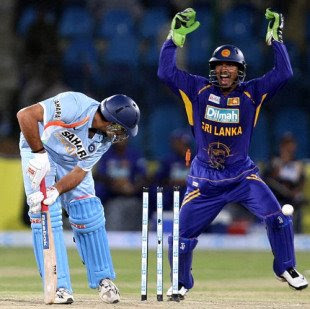 Yuvraj Singh was one of Ajantha Mendis' six victims © AFP

That Sri Lanka got anywhere near that was down to a man who refuses to bow to Father Time. India picked up four wickets in the first 12 overs, with Ishant claiming three of them, but Jayasuriya's 114-ball 125, and a 131-run partnership with Tillakaratne Dilshan utterly changed the complexion of the game.
It's perhaps no coincidence that India haven't won the Asia Cup since Jayasuriya became a regular at the top of the Sri Lankan order, and his mastery over the opposition was best revealed in the 16th over, bowled by RP Singh. RP had managed to escape relatively unscathed in his opening spell, conceding 24 from five overs, but when he returned, Jayasuriya took to him like a bull that had been riled by the matador's cape.
Sixes on either side of the sightscreen were followed by two wallops over cover, and after a one-ball lull, he pulled one over midwicket for six more. With Dilshan then taking three successive fours off Irfan Pathan, Mahendra Singh Dhoni had no option but to turn to spin, with Pragyan Ojha and Sehwag managing to have something of a fire-extinguishing effect.
India had started poorly, with RP conceding two boundaries to fine leg in the opening over, but a mix-up between two experienced hands gave them the opening they so desperately needed. Jayasuriya tapped one to short mid-off, and Sangakkara had already hared halfway down the pitch before he realised the striker had no interest in a single. Suresh Raina's underarm flick was the ultimate punishment.

Ajantha Mendis got a career-best 6 for 13 © AFP

But with two maiden overs bowled in the first five, India wrested back a measure of control, despite Jayasuriya's sporadic bursts of aggression. With the pressure building, it was Ishant who struck, as Jayawardene slapped one straight to Rohit at point. No bother for Jayasuriya though. A swivel pull sent an Ishant delivery for six, and Pathan's introduction was greeted with three fours in the over.
The problem was at the other end, where Ishant was wreaking havoc with the extra bounce he extracted from a comatose pitch. Bounce and a hint of lateral movement had Chamara Kapugedera playing one off the leading edge to point, and two balls later, the other Chamara - Silva - inside-edged one back on to the stumps.
Jayasuriya's version of consolidation involved a pull for six off Ishant and a slice of luck as a as a miscue off Pathan evaded RP, who ran around in circles and failed to get his hands to the ball. Dilshan contributed only four to the first 50 the pair added, from 30 balls, but he did his part, turning the strike over to allow Jayasuriya to inflict maximum damage.
With Sehwag and Ojha - Rohit contributed three tidy overs too - taking the pace off the ball, it was a different story. With the field spread, the boundaries dried up and the runs came mainly in singles. India missed a couple of run-out opportunities and Dhoni put down a sharp chance offered by Dilshan when he was on 37, but the helter-skelter pace of the Powerplay overs soon gave way to relative calm.
Eventually, the lack of action got to Jayasuriya and a flat slog-sweep off Sehwag only found Ishant at deep midwicket. After that, Sri Lanka lost their way. Dilshan eased to 50 from 68 balls, but when Pathan returned to bowl round the wicket, he popped a catch to Dhoni. Vaas, back in the fray after missing the last game, square-drove Ishant for the first four in more than 20 overs, but was castled by RP soon after.
Nuwan Kulasekara flailed the bat to finish with an unbeaten 29, but a target of 274 was expected to be well within reach for an Indian side that had included seven specialist batsmen. But after his extraordinary first over, Mendis soon set about making a mockery of the predictions.
Raina had been fortunate to survive a vociferous leg-before shout before he decided to play the worst shot of the evening, an ugly pull to a delivery that pitched on middle stump. Rohit soon followed, struck on the back pad by one that deviated away a touch, and by the time Jayawardene decided to take him out of the attack, Mendis had stunning figures of 4 for 8.
No one including the umpires knew quite what to expect, and the batsmen appeared unsure whether to play him as a slow bowler or a medium-pace one. That indecision was to prove fatal, especially against the carrom ball that was being propelled by a flick of the middle finger. As eye-catching was his accuracy. There was no width for the batsmen to work with, and hardly a loose delivery. Only Dhoni, who played the ball as late as he possibly could, showed any signs of coming to grips with him.
With Mendis casting such a spell, Murali's introduction went almost unnoticed, but with him in parsimonious mood, the tourniquet was tightening around India. Robin Uthappa and Dhoni added 38 in attritional fashion before Murali struck from round the wicket. Uthappa missed a flick, and the appeal from the bowler was just a formality.
Jayawardene waited a while longer and then brought back Mendis for the 30th over. India somehow survived that, but the game was up in his next. Pathan's attempt to flick through the leg side ended up at slip, and RP walked off bemused after one deviated away to take off stump. He should have had the hat-trick too, only Simon Taufel was as perplexed by a ball that pitched in line as Ojha was.
Dhoni had watched it all from the other end, defending stoutly and striking the odd four when he could. But once he inside-edged Chaminda Vaas to the keeper, the Sri Lankan dressing room readied for the celebrations. When Kulasekara cleaned up Ishant with 63 balls still to be bowled, they could begin in earnest. The combination of the six-hitting veteran and the six-wicket carrom-ball spinner had been far too much for India to handle.
Dileep Premachandran is an associate editor at Cricinfo