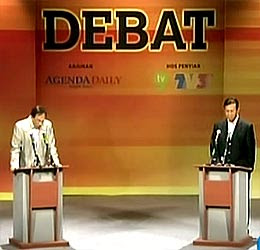 Of fact, half fact and fiction.

“Hari Ini Memerintah, Esok Turun Harga Minyak”. Well that was what the debate was all about. I must admit that the Minister Of Information was brave enough or should I say stupid enough to do a face-off against one of the most notable second to none orator we’ve known.

His opponent was not just a mere politician from the opposing coalition. That guy was an ex-minister, ex-education minister, ex-finance minister, ex-deputy prime minister and ex-acting prime minister (whenever the PM abroad). The guy has all the facts and figures and secrets that could make any of our ministers to shame. Dato’ Seri Anwar Ibrahim won that round hands down.

p.s: The vice-chancellor tried to make himself sounds and looks intelligent, in fact it was another way around. Don’t you agree? LOL…
Posted by Saudagar Mimpi at 12:08