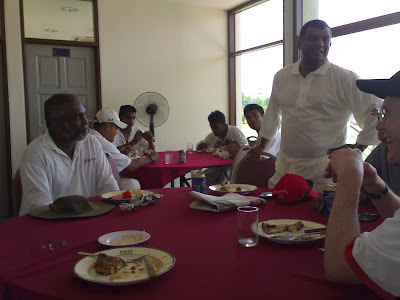 Dato' Tony Fernandez delivering his speech during the lunch break
as MAS cricket president looks on.

According to Concise Oxford English Dictionary (11th Edition), the meaning of loyalty is the state of being loyal – a strong feeling of support and allegiance.

Last Saturday, the very much anticipated cricket match between the two of Malaysia’s top airlines that are MAS and Air Asia. This is said to be the first inaugural cricket match between the two airline and for this year, Air Asia has committed themselves in hosting it and but I’m not so sure if MAS would return back such courtesy. Why am I saying this? In business it is a common thing for 2 conglomerates to compete, to rival in the same field of business. When it comes into sport, surely the atmosphere of rivalry could be present but it is solely for the sport itself. The funny thing is, while the Air Asia’s CEO Dato’ Tony Fernandez made himself present (he is a cricketer himself) to lead his team, none of the MAS top honchos could be seen. What is the problem here and can you figure it out? As a player and a staff to MAS, I personally lose my face over this matter and is this the MH “Malaysian Hospitality” that the company seems to advertise lately to the whole world?

Anyway MAS did win the match 128-8, Air Asia 127-7 otherwise the whole team would have to start finding new job lol… Congratulation to Dato’ Tony for your 2 wickets (that includes yours truly wicket) and during his speech Dato’ was in a very joyful mood though Air Asia lost, perhaps he won a more important battle such as 2 daily landing rights to Singapore?
Posted by Saudagar Mimpi at 04:02

Btw jom kita main vs Selangor U-17 this Sunday.

Mus, i applaud your enthusiasm in setting up your own blog. I wish i had half the passion (patience) to start one of my own. Keep up the effort and one day, you'll have a bunch of your regular posse in here. Have a nice day.

To Tacho: Just start having one and you will appreciate your "everyday".

Dato' Tony is a down-to-earth man. He can suits himself anywhere and anytime. I really hope one day I can be that way, anywhere, anytime does not matter.. huh..
Respect vs protocols

To tacho: Thanks for the kind words hehehe...

To Mirumi: Thanks for stopping by...

Kinrara Oval is not meant for spinners. So, hangpa paham2 la my meaning lol...

Correction: "Lanyak" was such a strong word to use since each bowlers were only allocated 3 overs for this 25 overs match where everyone need to bowl. Just to be fair to the other side hahahahaha...