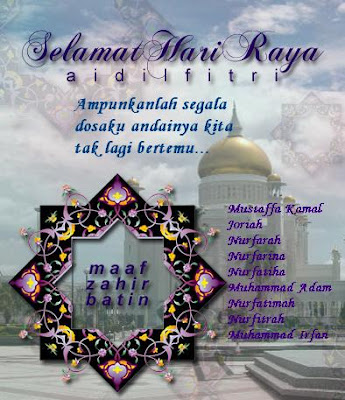 FOR the Muslims – the practicing ones in particular, this is a time for joy and celebration.The fasting month of Ramadan is drawing to a close and the Eid Mubarak – the blessed festival -- is coming.Having almost completed a month of dawn to dusk fasting, the Eid is the time to rejoice and to thank Allah for his bounty.

So on this happy occasion, I humbly take the opportunity to wish each and every Muslim Eid Mubarak, and, in the Malaysian way, to seek forgiveness – maaf zahir dan batin.To the non-Muslim fellow Malaysians, wherever they are, happy holiday. My few visits to the Pasar Ramadan – the Ramadan Market – gave the impression that many non-Muslims were as busy shopping for food and drinks for their brand of “berbuka” – breakfasting.And if we want to be patriotic, we can add to the celebration our sense of achievement for having the first Malaysian -- Dr Sheikh Muszaphar Shukor – orbiting the earth.

His ride to the outer space aboard the Russian Soyuz spacecraft is another milestone in our country’s history that we can all be proud of.Although Dr Sheikh Muszaphar Shukor is neither Yuri Gagarin nor Neil Armstrong, still he is among the lucky few of the world’s 6.6 billion people to be liberated from the gravity of mother earth.As of October 4, 2007, only 463 humans from 34 countries -- 415 men and 48 women – had reached low earth orbit (up to 2,000 kilometres) or beyond.Though it took us 46 years after the Soviet Gagarin became the first human to go to the space, we can be proud that we now have one of our own people out there in the blue yonder.

What many in our “mudah lupa” crowd may not remember or may not realise is the fact that the Oct. 10 event was the culmination of an idea that had its origin in Tun Dr Mahathir Mohamad’s maiden visit to Russia (then the Union of Soviet Socialist Republics –USSR) in the mid-1980’s.It was during the visit the famous Star City, the home of Russia’s Cosmonaut training facility to the northeast of Moscow (now known as the Gagarin Cosmonaut Training Centre), that Dr Mahathir though of the idea of sending a Malaysian to the space.It was also as a result of that visit that Malaysia started to evaluate and subsequently bought Russian jet fighters – the MiG 29 Fulcrum and Sukhoi Su-30 Flanker.But having sent a Malaysia to space and basking briefly in the glory of it, we must, as always, get back to the real world – the world of real people.

The world of the struggling farmers, fishermen, factory and office workers, small traders, taxi drivers, Tsunami and flood victims, single mothers, the sick and the destitute, the jobless and the unemployable.There nothing wrong in sending one or more Malaysians to the space or having a month-long colourful 50th independent anniversary, scaling the Himalayas, walking across the poles, swimming the seas and sailing the oceans.These and other magnificent feats are the manifestation of the Malaysia Boleh (Malaysia Can) spirit.

In the final analysis, however, it is the bread-and-butter issues such as the rising cost of living, the widening income gap, the falling rate of job creation, the rising rate of crime and the growing rate of drug addiction that matter.

Pardon me if I accidentally puncture your balloon and spoil your party.