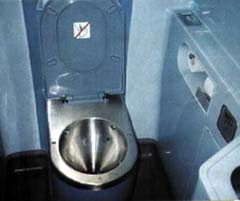 Did you know that commercial aircraft toilet waste system uses a vacuum system to collect, transport and store toilet waste. The waste system provides toilets throughout the passenger cabin. This is very much different from the normal toilet we normally use in our house or wherever we go. In aircraft, the system uses portable water to flush the toilet bowls and the vacuum provide the differential pressure to transport the waste through toilet drain lines to waste tanks in the bulk cargo compartment. A flush control unit controls the toilet flushing cycle. This unit sequences and times the cycle including the rinse water valve, flush valve and vacuum blower operation.

On ground or at lower altitudes the vacuum is created by a vacuum blower meanwhile at higher altitude the differential pressure between the cabins and the ambient provides the vacuum means for the toilet system.

A very popular myth (or perhaps it is a true experience) had occurred for sometimes now that once a very large or fat lady had stuck herself inside the toilet bowl while doing her business due to the vacuum effects that sucking the waste as well with the air inside the toilet bowl. This may sound hilarious to some but worse more to the frantic lady herself. If some day should you encounter the same experience, what would you do? I’m not saying it will happen but incident does happens in a very strange and in an amusing ways. This comes to the design of the toilet unit itself. They design it in such a way that the flush handle or button is beyond our reach so that in order to flush down the toilet, we have to get up from the toilet bowl to do it. Isn’t it interesting? You should try flushing the toilet while still sitting on the bowl the next time you board an aircraft, you may find it’s quite hard to reach the flush handle/button of the toilet unit.

So if you should one day stuck yourself inside the aircraft toilet bowl, do not panic, just insert your finger between the bowl and yourself. The gap should be enough to equalize the pressure inside the bowl with the cabin pressure.

What about if you are about to do your business in the outer space, such as using the toilet in the ISS (International Space Station) where sometimes the astronauts have to spend months if not years in doing research for the sake of humankind? As there is no gravity, the use of water and flush system is impossible. On the ISS, the toilet is operated by air pressure. A fan does the work that gravity does on the ground.

Urine is sucked inside the toilet and is collected in a container. When these are full they are discarded. For collecting solid waste, the toilet has plastic bags that are placed inside and air is sucked through tiny holes in the bag. Everything gets collected in the bag and the bags are self-close. Whoever used that toilet had to push the closed bag through a hole into an aluminum container and put a new bag in place for the next person. Because water is in short supply, the ISS carry its own miniature water treatment plant onboard. However, unlike most water treatment plant on Earth, the ISS system recycles the urine of both the crew and the laboratory animals and returns it to the drinking water supply and the fact is that the water runs from the ISS taps is more cleaner and pure than what we’re having from our kitchen taps. Now isn’t that interesting?