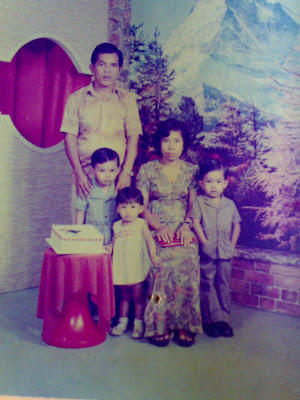 Photo of the blogger with his family
when he was 6 years old.


My late abah is very much a discipline man himself. My brother and me would get a fair share of his wrath if anything goes wrong within the household, even my younger sister did not get away that easy. During his younger days he’s more of a vagabond, a man traveling away from his hometown perhaps in searching for his sanctuary from the mean world. He just a normal guy, a gentle father and husband who holds his family dear to his heart.

Now it has been 28 years since his passing and every time Aidilfitri comes, my eyes would shed tears for him. I remember the day before the big day when everyone are making their final preparation for the Hari Raya, where my mother was busying herself making rendang, hanging the new curtains for the house and all the related chores. After breaking the fast, my brother, sister and me would play around the halaman rumah with fireworks and the panjuts while waiting for abah to get back from works. Later that evening someone from the police station had come to see and broke the news to my mother where all of a sudden I knew that the Hari Raya wouldn’t be the same again without my beloved abah. My late abah had collapsed when he was just about to cross the street after buying meats for the Hari Raya from the nearby market. He was somewhere between 46 to 48 years old at that time, and it was still early for him to go like that.

Until today it is still a mystery to me for the cause of his demise since the post-mortem is not a compulsory thing back than. But I do suspect that it got to do with his habit of chain-smoking.

My dearest beloved children, now I’m a father myself. Please forgive your abah past and present mistakes. I will try to cut down my chain-smoking if not totally get it rid off.
Posted by Saudagar Mimpi at 14:04