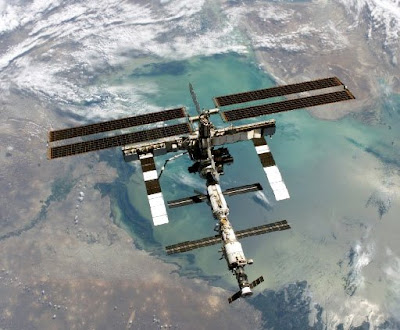 An image of ISS (International Space Station)
On Oct. 4, the world marks the beginning of the space race when Russia successfully sent the first man-made satellite into orbit. Subsequent progress in space missions have allowed mankind to send people to the moon, develop telescopes which allowed us to peer at the oldest stars in the universe and build an international-run space station, all fuelling our experiences and collective fascination to explore our galaxy and beyond.

This year also significantly marks Malaysia’s 50th independence from the British and along with that Malaysia will create history with its first angkasawan/pahlawan (astronaut) or whatever you may think fit of calling it into space joining the Soyuz 15-S mission to the International Space Station (ISS).

In the early stage of the preparation there was one remark made by one of the cabinet ministers (if I’m not mistaken) that during the mission, our angkasawan or pahlawan may experimenting in making “roti canai” and play “batu seremban” during the trip. Personally I think this is the most ridiculous and the most hilarious experiment if it is ever going to take place in this multi-million mission. Why not mention something more academically or more significant towards us, the mankind? Ever heard the American astronauts or the Russian cosmonauts doing some stupid experiments in the name of science such as making pretzel while in zero gravity condition? Of course they done it but not to the extents of publicly revealing it during the press conference until it became a mockery to their intelligence.

Malaysia is a fast growing nation but lately it seems that our beloved country is very much in a state of stagnation. Why? In comparison, Malaysia or whoever running this country is similar with a 12 years old child with the raging hormones taking its toll. Remember when we are in that kind of age, how we longed and eager to be an adult not realizing that being an adult is much more challenging and full of responsibilities and commitments to deal with. Let it flow and takes it due course and that is my say. Brunei and Singapore are the nearest and wealthiest nation than we are and have you ever heard of them wanting to send their angkasawan or pahlawan or whatever you may think fit of calling it to the outer space? Why not the government governed the monetary sources, which are at their disposal in dealing with our domestic needs???

iii). The blogger is not under the influence of alcohols, drugs or any banned substances which could cloud his judgment and the entry is entirely/totally his view towards the sake of mankind only.

iv). The blogger will reply any comments/remarks made, under the same entry.

vi). The blogger also would like to wish all his friends and to those who know him “SELAMAT HARI RAYA AIDILFITRI”.
Posted by Saudagar Mimpi at 08:15

My view on the angkasawan thingy.

Seems like you've got your own opinion on the angkasawan/pahlawan or whatever you may think fit of calling it thing...lol...

p.s How on earth did you link me...kasi ajar sikitla and pls don't tell Jdad hehehe...