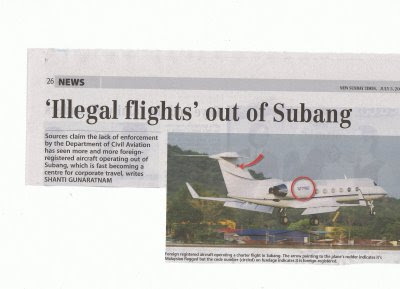 My news-clipping. For a better image, go here.

While our JPJ were busying themselves playing hide and seek with the operation of the illegal taxis at KLIA (last week news), nothing has been done to the illegal activities in our airspace.

For sometimes, chartered air services had found their ways on our shore or let say our skies. The main concern is, these air charter service operators had illegally operated by making Malaysia as their hub (see NST Sunday July 5th).

From the above news clipping, we could see that there is a serious breach of regulation that someone must answer for.

“We know the names of the companies which are using foreign-registered aircraft for air charter, and the DCA also knows who the culprits are”, according to a source. (more here)

What the hell is happening to our sovereignty now? The DCA as the authority body of the civil aviation just closes one eye to the culprits you mean? The DGCA even said that the department needs written complaints for it to act. By needing a written complaint, the complainant himself must be someone that knows something about Malaysia air-legislation. No makcik2 or pakciks can make a sound complaint regarding this matter. This means that if nobody complaint, all is smooth sailing.

Flight plans must be submitted to ATC preferably 72 hours or even a few minutes before take-off. Some pilots only give the flight plans when the aircraft is already airborne and what if the same flight plans were used by another plane at that very moment. Disaster could strike.

On foreign registered aircraft displaying Malaysian flags, the DGCA said he doesn’t know whether it is legal or illegal to do so because the law is silent on this.

Now this is serious. The Director General of Department of Civil Aviation doesn’t know on the law which custodian was under him.

And today it was in the news, no complaints were made. The DCA is one of the most feared government agency in Malaysia is now had tarnished its image forever.

As for me, now it is time for us to audit them and let them taste their own medicine.
Posted by Saudagar Mimpi at 21:44

Arc One Charters is one of India’s finest air charter company which is providing Charter Aircraft Service India across all major cities of India.