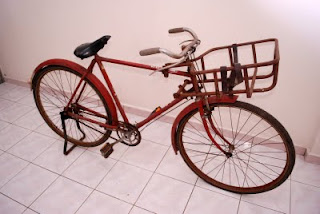 Not too long ago, I never dreamed of seeing a mode of long distance communication without wires or cables attached to the apparatus itself. Even landlines or house phones were treated as a luxury items to many except for businesses and the fortunate ones.

To most of us normal folks, it is always the normal mail and to receive a reply from one it may get days or even weeks should the recipient finally decides to reply. Mister Postmen were known by their first names back then and it was a normal thing to see people sitting in front of the house waiting for the red bicycle riding VIP to stop by or at least a glimpse of him (at least he is not on strike), well perhaps tomorrow he will stop. He must!!!

Today, they still doing the delivery but mainly confine only to utility bills and reminders from the banks and using a more advance mode of transportation than the bicycles.

Then came along the mobile phone technologies and it started with just voice calls till someone from the R&D department realized that short messaging system is an equally if not more profitable to the network providers. For the past 5 years, the technology evolves so rapidly that it only takes a week for a new model with enhancements on steroid to replace a previous one.

Nowadays, everyone is using a smartphone. IPhone and Blackberry are the most common apart from the HTC and Samsung. No longer using the phone for idiots which is the early version of Nokia hence the simplicity of using it with closed eyes.

In Jakarta, I saw a single individual using 3 Blackberry smartphones of the same model. What the…

I guess one is for Facebook, the other one is for BBM and the other one is for emails? What about phone calls and SMSes? I guess they share those functions too. With the Wi-Fi capability, one doesn’t need to subscribe to any network, just be inside the Wi-Fi perimeters and there you go. Web browsing, facebooking, emailing you name it. A wonder of a small thing could do to mankind.

When Alexander Graham Bell accidentally invented the device, little did he know the impact of his creation to the world.

My BBM hasn’t gives me any sign of incoming message for two days now. Just like the days of the glorious Mister Postman where everyone knows him by his first name, I shall wait… forever and always…

Our postman in Parit still delivers...for mum's monthly allowance frm one of my brothers. And the postman doesn't use the bicycle anymore, its the motorbike. As for the smartphone, ipad nopad...errr am still living in the Jurassic era. Btw, still remember the song by Stevie Wonder, "I just call to say I love You?"