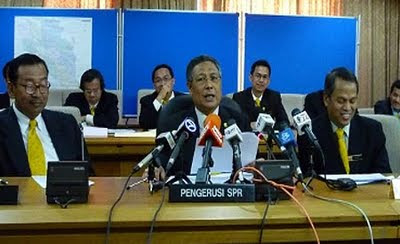 Hahahaha... the best news ever. The Election Commission (EC) had decided and fixed the polling day for Bagan Pinang by-election should be held on 11th October which falls on Saturday.
(more here)
Saturday???
Of all the previous by-elections, all were held on Tuesday@working day. Now all of a sudden, the EC decided to falls back to the norm of election that it will hold the Bagan Pinang by-election on Saturday so to give ample time and convenience for the voters to cast their right since some of the voters are residing outside Bagan Pinang even Negri Sembilan itself.
This shows the BN are going all out in retaining their seat there from falling to the PKR by using the EC.
This also marks the confident level of Barisan Nasional from the previous by-elections and the one that on its way this October.
Hmm... Am I being seditious here?
Posted by Saudagar Mimpi at 18:42