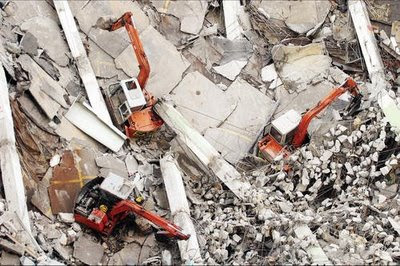 Ground Zero: 3 excavators that been working inside the building

AFTERSHOCKS! Building had NO approval for demolition... and more shocks
So many stunning revelations

GROUND ZERO: The state of the former Jaya Supermarket building after it collapsed on itself yesterday. Note the three machines — they had been at work on the building.

SHOCKING: The Department of Occupational Safety and Health (DOSH) has revealed that NO approval was given for the demolition of Jaya Shopping Centre, the former popular lifestyle centre in the busy commercial enclave of Section 14, Petaling Jaya.

SHOCKING: The demolition contractor had been nibbling away at the collapsed section of the 10-storey abandoned tower with long-reach excavators over the past week.

SHOCKING: The building might have collapsed because it was overloaded with heavy machinery. Eight excavators were inside, one of which still had its engine running.

SHOCKING: Explosives are believed to have been used over the past week, with residents claiming they heard “booming” sounds.

SHOCKING: The core demolition work was to have started at 6pm yesterday — but no one was aware of the method that was to have been used.

SHOCKING: Experts suspect no preventive measures were undertaken to ensure that the building did not collapse or become dangerous due to the effects of vibration, wind or other activity. more here

Now it was confirmed 7 lives were lost during the incident. Hmm... I wouldn't call it an incident, in fact it would've never been happen if the related parties exercised extra care and follow the right guidelines when doing the demolition involving congested areas.

In the news bulletin last night it was mention that several homes had to be vacated because it was unsafe hence affected by the event. Who's to blame, who's to compensate the owners?

The newscaster also mentioned about no local were killed or injured from the calamity apart from 9 Indonesians who were doing some works inside the building.

The way he said it what I can interpret was; we can go easy now since no locals were involved. What craps are talking about now? Do you mean foreigner lives have no value here (except for all the Mat Saleh kot...)?
Posted by Saudagar Mimpi at 14:48

the government will be kelam kabut for a moment and suddenly silence just like other case i.e. express bus accidents, high price for supplied police force standard issue items, etc. the ministers are definitely 'busy' with 'other things'