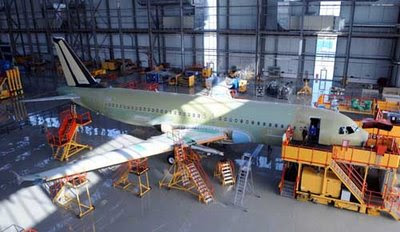 This was taken from MAS Engineering Portal.

May 18, 2009
The first Airbus plane assembled outside Europe made a successful four-hour maiden flight in China on Monday, EADS said.

Airbus began assembling some A320 jets in Tianjin near Beijing in September from fuselage parts shipped from Europe, increasing its presence in the world's fastest growing markets for large aircraft.

"This A320 assembled in China unquestionably demonstrated the same quality and performance as those assembled and delivered in Hamburg or Toulouse," Fernando Alonso, senior vice president at Airbus, said in a statement.

Airbus aims to reach output of four A320s a month in China by the end of 2011. Airbus has estimated that China would need more than 3,000 large aircraft between 2006 and 2025, including 180 super jumbo passenger planes.

The first aircraft will be delivered to Dragon Aviation Leasing in June and be operated by China's Sichuan Airlines.

Chinese firms have ordered more than 700 aircraft from Airbus, the majority of which are from the A320 family of planes, it said.

Airbus and US rival Boeing have been turning to Asian markets, led by China, for growth as demand weakens at home.

But Airbus faces criticism from European unions who say the move adds to outsourcing fears amid the recession and could result in the loss of European technology to a potential jet-making rival.

Beijing may need an estimated USD$30 billion to realise an ambitious goal to manufacture passenger jets with more than 150 seats and freighters capable of handling more than 100 tonnes of cargo to take on Boeing and Airbus by 2014.