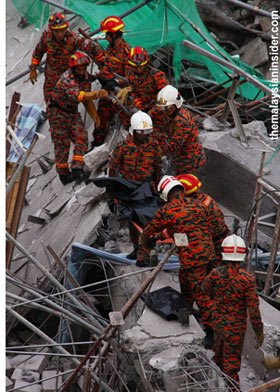 "Petaling Jaya, 28 May - Two workers were killed and five others are still trapped when Jaya Supermarket in Section 14, a Petaling Jaya icon being torn down for redevelopment collapsed during demolition works that went awry in the busy commercial district." more here

Now lives were taken. You cannot claimed it as an act of God. Such blunders were an act of men, total ignorance I say. It's a shame when we can built huge and long tunnel under the city where the work was even featured in the Discovery Channels not long ago, we can built the tallest tower in the world (at that time); not one but two side by side. And now, this calamity happened.

By the way, did our JKR have any expertise in demolishing any unwanted building? As usual, this warrants for a Royal Commission to be set up.
Posted by Saudagar Mimpi at 11:26