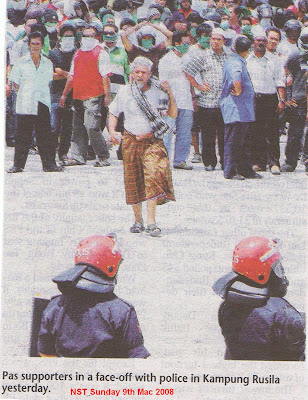 Well, that was the first line from the hit song Wind of Change by Scorpions. It is not a surprise to me that the wind of change had finally made it presence felt throughout the nation ever since we were introduce with this Demokrasi Berparlimen some 50 years ago. But for this 12th GE, my view is; that it is no more a mere normal wind. The wind had morphed into a tsunami and this tsunami had swept across the entire nation.

This is the third time I’m practicing my right and role as a Malaysian citizen in casting my vote against those I despise (politically that is). I arrived a the polling station Sekolah Kebangsaan Kampung Subang which caters for P107 Subang and N39 Kota Damansara somewhere around 10 o’clock and within less than 5 minutes I’ve done my rights. Not many were there during the morning; perhaps more are getting there during the noon. All are quite and things running smoothly. Along the way lead up to the centre there were plenty of these BN makeshift stations if compared to the others. Anyway it is not how many khemah or how much money splashed, its just a plain simple that the RAKYAT had spoken. 5 states had fallen; Kedah, Penang, Perak, Selangor and of course Kelantan to the opposition known as Barisan Rakyat.

Many political giants also had lost their seats simply because they’re no more relevant to the need of the people such as Shahrizat, Awang Adek, Aziz Samsudin, Zainudin Maidin, Koh Tsu Koon and not to mention our “beloved” arrogant Minister of Toll who’s celebrating his 72nd birthday in defeat I think.

To those who got elected, don’t get carried away with your new winning. Remember that you’re representing the Malaysian people and you’re being paid with our money in doing that, not for free!!!