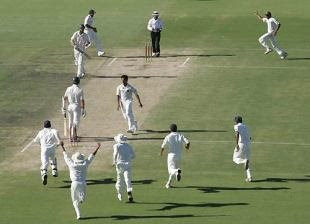 New life for a young rivalry
Australia v India has, over the last decade, grown into cricket's premier face-off, and on the evidence of the current series there's plenty to come
January 20, 2008

The intense rivalry that now exists between Australia and India kicked into high gear in 1997-98, appropriately initiated by a wonderful contest between two champions Shane Warne and Sachin Tendulkar in Chennai.
With Warne now more interested in straight flushes than turning legbreaks, and Tendulkar's glittering career winding down, it was easy to assume this rivalry had been a sprint rather than a marathon. However, the startling events in the current Test series have shown that the contest has had a second wind. We're in for many more years of intense competition between these two proud cricketing nations.
The once great divide that characterised these two teams, the inability to compete away from home, has closed like an unhinged door over the last few years. Under Ricky Ponting, Australia broke their hoodoo and won a series in India for the first time in 35 years. Now Anil Kumble has led a vibrant side to an inspired win at the WACA, the bouncy graveyard of many touring sides, not just India.
For Australia, talented young cricketers like Michael Clarke, Mitchell Johnson and a revitalised Brett Lee are providing the spark for a continued run of success. On the other side, RP Singh, Irfan Pathan and Ishant Sharma are inspiring an Indian side that has for long been top-heavy in batting. The successful injection of new blood into both teams provides ample evidence that this rivalry is far from a dwindling affair.
The fact that India has been able to shrug off a turbulent loss at the SCG and disregard the ridiculous hyperbole surrounding the WACA pitch to bat first and dictate terms in the third Test is indicative of a changing mindset in the team. India is unearthing a new breed of Test match player, more competitive and resilient. Kumble has embraced this trend and Mahendra Singh Dhoni embodies its spirit.
The resurgence of Irfan Pathan is a particularly pleasing aspect of India's determined performance. Pathan has always been a talented and smart cricketer but that doesn't make him immune to the peaks and troughs all players have to endure. The good signs at the WACA suggest he's been to the valley and is now on the ascent, as a far stronger character.
His grit and strokeplay when batting was encouraging but it was the sight of him swinging the new ball at a reasonable pace that suggested his confidence was returning. He knew his bowling was needed in Adelaide, but just so the selectors would have no doubts about picking him, he strode to the wicket as a night-watchman and after outlasting four illustrious partners, returned to the pavilion a bonafide top-order batsman. He won't always have good days but this Test should have given him the confidence to avoid slipping back to the dark times he has just endured.

On the other side of the ledger a young Australian fast bowler will have learned a good lesson after a few demoralising days at the WACA. With so much talk about the pitch being fast and bouncy, Shaun Tait was sucked into making an ill-advised comment about bowling the fastest ball ever delivered. This comment was delivered before the match started but he was unable to deliver on the field and finished low on confidence, bowling in the 130s, and couldn't even erase the tailenders at a crucial time in the match. Tait should now know that it's wiser to let your deeds do the talking and that Test matches are a far cry from the wham-bam-thank-you-ma'am razzmatazz of Twenty20 cricket.
Test cricket can be an absorbing contest when bat and ball are evenly matched. And in a game that can be sheep-like in its ability to follow meaningless trends, it's to be hoped the impact of swinging deliveries on recent Test series has been noted. The fate of the Ashes in 2005 turned on England's ability to swing the ball, and last year India turned the tables on Michael Vaughan's side in the same way. Now we've had the result of a wonderful contest at the WACA determined by the swinging ball. It's a timely reminder of the importance of this often undervalued skill.
Twenty years ago talk of an intense rivalry between Australia and India receiving a boost on the bouncy WACA pitch would have been sufficient grounds for certification, followed by insertion into a white gown and a padded cell. There's nothing like a healthy rivalry and a keen contest to quickly erase any thoughts of madness and conspiracy.
© Cricinfo
Posted by Saudagar Mimpi at 18:09