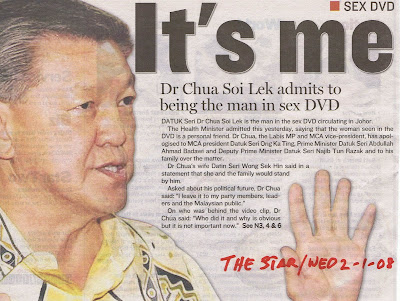 
Whoaaaaa… what a great sensation that hits our political scene for the New Year. “It’s me”, boldly printed in today’s The STAR edition. I’ve yet to read others but I’m sure each and every newspaper in the nation will carry the same frontpage headline.

When somebody with that kind of profile suddenly made news with that kind of act, one might wonder that how many more of these prolific profiles out there? I praise for this bugger bravery and honesty in admitting his lustful deed even with a so called “personal friend”, but what disturbs me most is that this bloody bugger had the cheek to still stay in his office to serve the PEOPLE. Asked by the reporter on his stand whether to make a police report or not, this bugger will think about it but the police had already launch an investigation on the ground of intruding with people’s privacy. Bollock, his privacy I say.

Step down laaa period; don’t even wait for the PM’s mercy for you to continue heading the Ministry Of Health. It will tarnish more his administration which is already stained with plenty of misdeed either by him or his ministers. A person with this kind of moral value is not fit to be a leader except for being a “bapak ayam”…

P.s. By the way, did this bugger practice safe sex with his “personal friend” hehehe…?
Posted by Saudagar Mimpi at 08:32