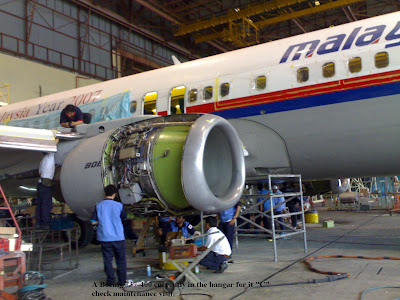 Do you realize that the aircraft skin thickness is just about 63 thousandth of an inch (0.063 inch)? Well, it’s that kind of thickness that separates us in the comfort of the cabin from the ambient air outside while in flight.

Basically aircraft fuselages (from the French fuselé "spindle-shaped") are of a tubular shape hence to give less resistance from the airflow and known as a monocoque or a semi-monocoque fuselage (stressed skin). Monocoque is a French word meaning a “single shell” just like the shell of an egg. A true monocoque fuselage has no internal structure members except for the tranverse rings and Bulkheads which serve to give contour to the outer skin or shell. All loads are impose on the skin only and a typical example of this can be found on the shell of the F1 cars.

Nowadays modern aircraft fuselages are of a semi-monocoque (stressed skin) where the loads imposed are evenly distributed to the skin and the adjacent structures such as longerons, stringers and frames. These give a much stronger fuselage if it is to compare to the olden age aircraft which traveled on a lot less speed than the modern aircraft. 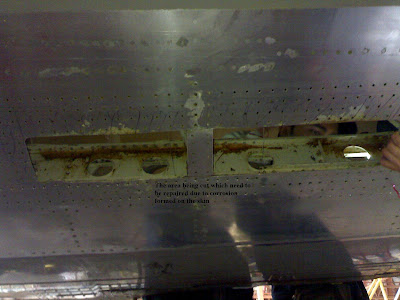 The image above shows how the skin on the belly just below the aft cargo being cut due to corrosion formed on the inner skin affected by moisture from the cargos or leakage from the galley/lavatory in the cabin. The repair done is to remove the effected area and put a 2 pieces 0.050 and 0.063 inch doublers of a 2024T3 aluminum clad material. Upon look closely, you could find how thin the skin is. 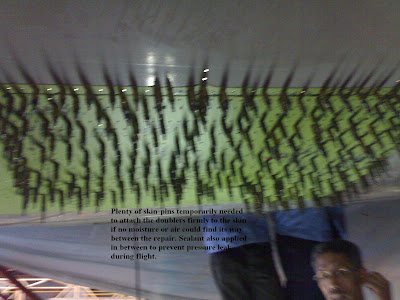 The second image shows how the doublers looked after fabrication and coated with an anti-corrosive primer while being temporarily installed by using skin-pins according to the size of the fastener holes. 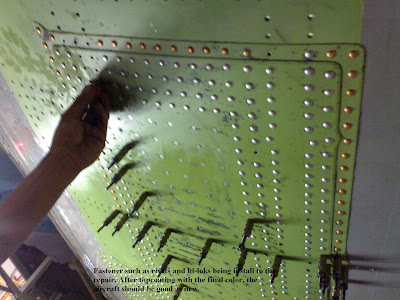 The last image shows that the job is halfway done where the fasteners such as rivets and hi-loks being installed permanently on the repair and after the whole process was done, the painter will apply the normal white topcoat use by MAS aircrafts.

Mus, I have some queries on this monocoque thingy:

- do you guys do any stress calculation on the plate, kalau ada which method

- Aluminium can rust? don't you have protection like painting, galvanised etc

- what about composite materials, which I think are lighter and stronger than aluminium, can't they be used as substitute

- bila kita nak batting sekali ni, yes me and you to create a 100-run partnership?

bad, batting at no 6

To answer your queries:

1. Stress calculation were done by the manufacturer of the a/craft and documented in the SRM (Structure Repair Manual) though in certain cases we have to do it ourselves. That is why there are various thickness of the plates to meet up with certain requirement. As for my section, we will always refer the SRM before deciding how/which repair scheme and type of material to be used.

2. Agreed, aluminum can rust. That is why the aluminum clad were treated and primed with an anti corrosive paint and sealant as well with the final topcoat before being installed to the aircraft.

3. True, composites are more durable and lighter. But for our generation it was used only on certain part such as the control surfaces but never on the skin itself due to the inability to correspond with the change of temperature and flexibility.

4. Yes, we have NDTed the a/craft. Infact apart from doing it to the fasterners, the whole a/craft will undergo the process pre and post checks.

5. As for the batting partnership, we can work something on it provided we play the gentlemens' 50 or 40 overs game, howwwzattt?

With each explanation, my eyes twinkle with admiration and delight... probably because i understand what was being discussed, the only part that didnt make sense to me was the criket part.

i think i know who you are hence our telecon just now lol... it's metallurgy my dear watson...