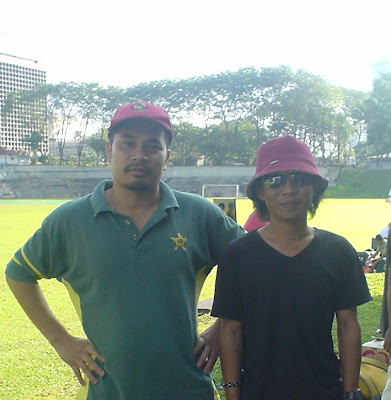 With my fellow cricketer/blogger right before the morning match.

Nava Shield Cricket Tournament 2008 has just begun last Sunday for me. The tourney was conducted in such a way so that each game will be played during the weekend since many of us have a day job to attend to apart from our passion toward cricket which can only be fulfilled during the weekend. I managed to be at the field in the morning though MAS Cricket’s match will only be started in the afternoon just to give my support to my other team, Staroba Orange Cricket Club. I love to play with them but as a secretary to MAS Cricket let just say that I have to put aside that kind of thought and help my company’s team to win our first 3 points and to be on top of the group. Anyway, SOCC lost their first match. What can I say, better luck guys for this weekend’s match at Kelab Aman. Hey, come to think of it MAS also will be in Kelab Aman for the afternoon match…
Due to insufficient number of players in the opponent's camp, MAS was awarded a walkover and managed to grabbed 3 points that afternoon against the SSR (Sunway Residence whatever…). Anyway since the pitch was at our disposal, we carry on with a friendly match by dividing the team by an equal strengh so that our afternoon won't be wasted. MAS batted first and got 120 for 5 and managed to restrict the opponent by a mere 70 odd runs. After a long spell of under-performed batting, yours truly managed to outlived most of his peers by scoring a Not out double figure (batted number 5) and was hoping for this weekend’s game the same output could be delivered by him. So, how was that my fellow cricketer???
Posted by Saudagar Mimpi at 09:50

Ok la, ok la. You deserved it. But pls don't compare with Wasim Jaffer. He's the opening batsman and did a double hundred.

Hope that you maintain your performance in the next match.