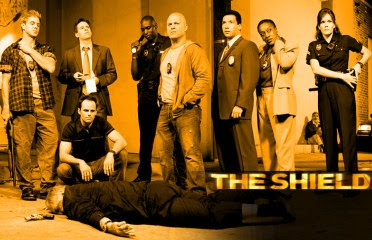 The infamous Det. Vic Mackey (Mike Chicklis) with the bunch in
the Emmy nominated series, The Shield.

I watch many films or tv series that involve cops chasing bad guys and bad guys chasing them in return. I watch many Hollywood, Bollywood, Kollywood, Hong Kong and the rest of the world films or tv series that sometimes show how cops can be corrupted and could be bought by the baddies if correct amount of dough could be greased on their palms. One classic example of such behavior could be seen in “The Shield” currently running on Astro AXN. They’re all a good dedicated cops, doing their best to serve the establishment but when human factor comes into place, they’re all have to face the reality in life. Well I’m not saying all cops are bad but certainly there’re several rotten eggs in the basket.

Recent development in our local news is about one of Malaysia's top ranked police officers was arrested and charged with corruption on Thursday for allegedly concealing massive wealth, a scandal likely to further tarnish the frequently maligned force. So, this is the reality we been shunned off these while, not the all smooth sailing we’ve been fed with…

iii). The blogger is not under the influence of alcohols, drugs or any banned substances which could cloud his judgment and the entry is entirely/totally his view towards the sake of mankind only.
Posted by Saudagar Mimpi at 03:20

-rage against the machine-

We'll see what will happen during the Gelombang Kuning this Saturday.