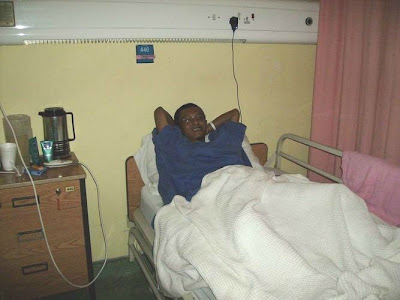 A few days after the surgery.

I’m sure not many of us are familiar with the term “TEH”. Well for the uninitiated, TEH is a medical term derived from Thrombosed External Hemorrhoids (http://www.aafp.org/afp/20020415/1641ph.html) where in the layman’s term it is an equivalent to piles. The word thrombosis itself means; a local coagulation or clotting of the blood in a part of the circulatory system, meanwhile hemorrhoids mean; swollen veins in the wall of the anus.

Well do you find it disgusting or even gross for me to ever mention such thing in this entry? I’m sorry if you feel so but do let me share my experience with what I had to endure early last year. It all started with this tiny little globulous growth just by the side of the anus. I’ve had it for a few days at first and thought nothing over it except for the itchiness and perhaps it might gone away in due time, go to work as usual and even had a cricket game at the Selangor Club during the weekend. What started as a good game for me turned out to be a heck of a prize to pay. Come the following morning, this tiny little globulous growth was not that so tiny little globulous growth no more, since that it has grown to the size of a marble plus the itchiness and the burning sensation as well. I said that’s it, I’ve got to go to the hospital for this damn thing.

So down at the SMC I’ve met Dr. Shah my physician (I had my gall bladders removed by him years before) for his advice and by one look at the situation, snap right away remove he said. Damn, another surgery but this time it was different. Imagine somebody else is going to poke their fingers down your arse? Anyway I had the surgery on the same day and was given the option by the specialist anesthetist whether a partial anesthetic or a complete knocks-out. I chose the latter one since you guys are going to prod me mercilessly with god knows what, I rather knock myself cold.

The surgery went well except for the 10 days in the ward especially when I’m trying to relief myself for the first time, it is hard man. I mean the thing is really solid rock. For the duration in the ward I was given diapers for use, who knows my muscles down there still in a state of shock and I might not even realize something slipping down under. Even at home I’m the heavy user for a few weeks of the all-night long wings or no wings sanitary pads and had become the subject of ridicule for my wife.

For those out there who had the same experience as mine, you guys should know better and whoever has this tiny little globulous growth going on and off on them, better for you to take some kind of precaution. You’ll never know what hits you until it is to late…

p.s. Thanks to my SERATAS buddies from up north for dropping by and not to mention the usage of the bathroom lol…
Posted by Saudagar Mimpi at 09:45

Thanks for linking my blog.
I just hope that more seratasian will follow your steps...

For ur 'My Books' link, get a book widget ler and review from amazon. better i think.