howwwzattt...of being sexist and telling the fact... 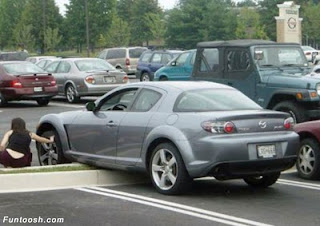 Bung collides with MPs, which was what The Star had carried out in its news today. This is not new in the Dewan Rakyat when not long ago he too was under fire when making sexist remark on women on how they “leak” every month.
He was wrong at that time I guess and yes he was being typically sexist in making that unnecessary remark.
The latest uproar came when he said that most women drivers were slow and did not pay attention to their surroundings while were at the wheel.
“Some women drivers drive slowly and seem oblivious to traffic. When you honk at them, they get agitated with some even showing hand gestures to other drivers,” during the debate on the Supplementary Supply Bill.
He got it right I say. Well perhaps some of you might think that I’m beginning to join the alpha male league this time around. No, you wrong brader.
Well base from my personal experience, 90% of women do tend to be oblivious to traffic, jumpy and the worse of all is the inconsiderate trait they have when behind the wheels.
Imagine when you’re at a parking lots trying to slot your parking ticket into the machine with cars choking in front and on your back too. Same goes to the next lane besides you and there is only one machine that’s operates.
Male drivers would just take their turn, my lane next lane rule. An unwritten code of conduct when dealing with such situation. But wait, the ladies!!! They just love to inches into the flow without even thinking of the simple system that we had adapted ourselves into.
This happened everywhere, not confine of only getting oneself out of the parking lots. Junctions, toll booth, on a jam packed roads and what not.
You hollered when we tell you the fact, accused us the male species of being sexist but at the same time you just failed to use your reasoning. You demand the same treatment in modern society as men, you formed whatever women liberation associations asking for fairness but when it doesn’t suits you, you accused us with many things.
I’ve nothing against women. My mother, wife, children, girlfriends are all female. But please do reason yourself and just don’t simply get jumpy with the fact that when behind wheel, you do tend to be an INCONSIDERATE person and that was just the tip of the iceberg.

NOTE: I too do get snarling hissing looks from them, sometimes 2 middle fingers LOL...
Posted by Saudagar Mimpi at 10:07

Lo and behold for he writes again only to step on my tail... MEEOOooooowwww!!!!!
Now look here 'brader',
The word 'inconsiderate' was never meant for women alone. (Yeah ladies, I know I'm right, thank you)
I have come across men who drove like s**t on the road, parked worse than a handicapped driver and of coz hogged it, sped on it and curse the women for being in their way not even realising that the alpha male in them are being inconsiderate to others. Middle finger to you? Nah, I think I'll reserved that for the men drivers to give to the men...

Salam Yob, oh myyy...there are no inconsiderate male or female drivers, for that matter...there are only bad drivers. Period!