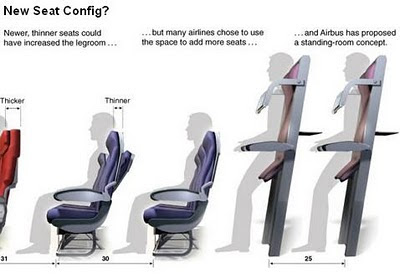 The low-cost airline would charge passengers less on “bar stools” with seat belts around their waists.

Michael O’Leary, the chief executive, has already held talks with US plane manufacturer Boeing about designing an aircraft with standing room. He is now seeking approval from the Irish Aviation Authority before ordering a new fleet of carriers, according to The Sun.

A Ryanair spokesman told the newspaper: “If they approve it, we’ll be doing it.”

Mr O’Leary is reported to have got the idea from the Chinese airline Spring, which has put forward similar plans. It estimates space could be made for up to 50 per cent more passengers and costs could be cut by 20 per cent.

It is not the first time Ryanair has come up with a controversial proposal for cutting costs. Earlier this year Mr O’Leary suggested passengers could be charged £1 to use the on-board lavatories.

In an interview on BBC television he said that the low-cost airline was looking at the possibility of installing a coin slot on the lavatory door so that “people might actually have to spend a pound to spend a penny.”