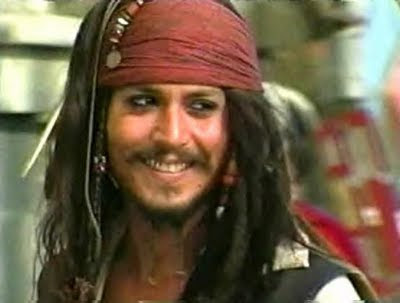 Depp nudged aside Jackman to get the coveted endorsement from People magazine Wednesday. It's the 46-year-old actor's second time as "Sexiest Man Alive." He also won in 2003. (more here)

Well in Malaysia when you are 46, most likely you'll be starring as a father or some gardener or driver. Never will you get the chance to be the leading man any longer except for Jalaluddin Hassan and Rosyam Nor.

Over here we only interested in looking at the book cover, never on what we are going to find inside of the book.

To stress more on my point, recently Captain Jack Sparrow had signed a deal for the fourth installment of Pirates Of Caribbean for a whopping 21mil pound sterlings making him the highest paid leading man in the world surpassing Tom Cruise.
Posted by Saudagar Mimpi at 00:59