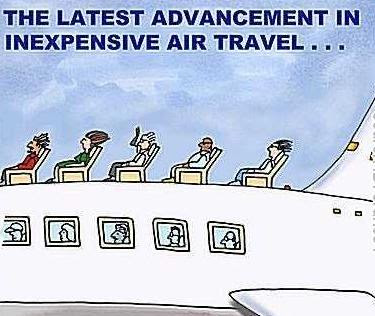 LONDON, June 10 — Airlines are reducing the size of spoons and dropping in-flight magazines to make planes lighter and save fuel during the recession, according to the International Air Transport Association.
In the United States, Northwest Airlines has excluded spoons from its cutlery pack if the in-flight meal does not require one.It is not alone, according to Paul Steele, director of the environment at IATA.
Another carrier, JAL of Japan, took everything it loaded from a 747 and put it on the floor of a school gym to see what it really needed.As a result it shaved a fraction of a centimetre off all its cutlery to cut weight.
"When you are talking about a jumbo jet with 400 people on board, being served two to three meals, this can save a few kilos," he said.You work out how much fuel that consumes over a year, and you can be talking about a considerable amount of money".
Other carriers have come up with all sorts of ingenious initiatives to shift the flab off their aircraft.
In-flight magazines are going and carriers are even putting their duty-free catalogues onto the seat-back televisions."Airlines are going through what they put on a plane. They are now saying that if we are only carrying 100 passengers, then only load what they need," said Steele.
Catering trolleys are becoming lighter and less water — both bottled and in the tank — is being loaded.The next generation of aircraft seats are likely to be up to 30 per cent lighter than the current generation, with composite replacing aluminium.
Reinforced carbon fibre is used for the shields for the in-flight televisions, cutting the weight by as much as half.Many of the initiatives were triggered by the soaring cost of aviation fuel. But are now becoming important for airlines who are coming under pressure to cut their carbon emissions.
In Kuala Lumpur, 226 leading airlines pledged that they would achieve "carbon-neutral growth" by 2020, meaning that their emissions would be capped — even if the number of planes in the sky increased.
At the same time the industry is looking to step up the use of alternative carbon-free bio-fuels, which should account for up to six per cent of the industry total by 2020.A number of carriers, including Virgin Atlantic, Continental and Air New Zealand, have carried out trials of alternative sources of energy such as algae.
It is anticipated that such fuels, which have appear to have performed as well — if not better — than conventional kerosene, will get safety approval as early as next year.
But, given the high initial cost, they are unlikely to be in widespread commercial use before the middle of the next decade. — Daily Telegraph
Posted by Saudagar Mimpi at 12:39