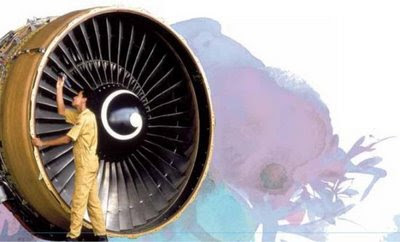 In awarding the 36 year old organization with the 2009 Asia Pacific Frost & Sullivan Airframe MRO Center of The Year Award, Frost & Sullivan said, "Malaysia Airlines E&M division has exhibited its capability to deliver comprehensive services including aircraft modification and upgrades to its customers in the Asia Pacific region and worldwide.

“It has delivered high value to customers. In addition, it has demonstrated growth in the customization of airframe MRO products, innovation, marketing, and sales strategies that have resulted in revenue growth over the past 2 to 3 years. Potential revenue for the coming years remains strong.”

Senior General Manager, E&M, Mohd Roslan Ismail said, “We are delighted to accept this award on behalf of the entire engineering team who has worked very hard to position our E&M as a leading MRO player.

He added, “Last year, we set up MAS Aerospace Engineering (MAE), a wholly-owned subsidiary to take advantage of the MRO business. Our success story includes signing a JV agreement to establish a JV MRO in Hyderabad, India, which marks our first foray overseas.

“Key priorities for the year include finalizing all joint ventures off-shore and overseas. We hope that the JV with Qantas and Alenia Aeronavali of Italy will be fully operational by next year.”

Established in 1972, it has over 36 years of experience in MRO business. It is a certified MRO organization by 31 National Aviation Authorities including the European Aviation Safety Agency (EASA), the U.S Federal Aviation Administration (FAA) and Malaysian Department of Civil Aviation, amongst others.
*Taken from MAS Engineering Portal
Posted by Saudagar Mimpi at 09:16