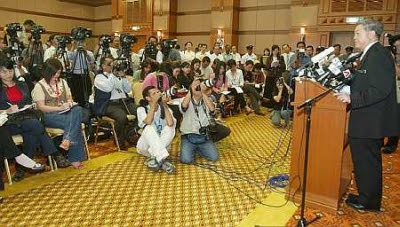 I don’t know what else to say apart from, “holier than thou” my ass… Seems like we Malaysian are more dependent on SMSes result rather than your integrity in doing the only way by resigning from whatever post you hold. I was quite amazed when I read the statement by this bugger relating on whether to step down or not by depending on the polling conducted by the mass media. Weiiii… it’s not the results that count, it was your duty to step down from further embarrassing the country and from betraying the PEOPLE that have elected you in representing themselves.
So, what have the SMSes say? 90 percents say, get lost you the cheater of the wife, the children, the country and the PEOPLE. Interesting enough when this bugger put the blame on others for being a so-called “holier than thou”http://thestaronline.com/news/story.asp?file=/2008/1/3/nation/19906141&sec=nation&focus=1 when passing the judgment against him. What sadden me the most was the way that our mainstream medias handle the issue which seems that it was okay for you to commit such behavior on the pretext that we are all human. Human makes mistake, is it???
So, what has our Islam Hadhari administration has to say on this? Apart from the PM's statement last night on the local news which seems like "macam nak taknak je komen", no other damning comments were made by the current reigning politicians. Where are the champions have gone???
Posted by Saudagar Mimpi at 18:12

be careful... someone is wathcing ur blog!!!!

Every mainstream medias had put their shares in reporting the news. It was nothing that M'sian citizen had been fed for the past one week. It was my view on the matter.