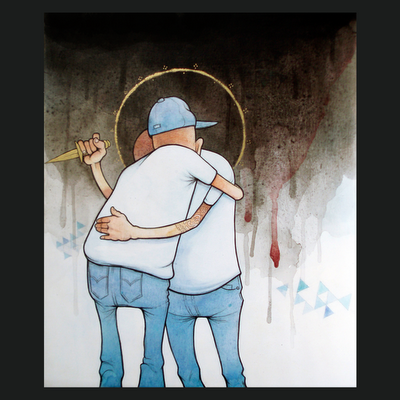 Trust can take years to build, but only a second to break... – Self Quoted
He sees himself as a person who regards friendship dearly to him. It was not something that he can buy whenever he needs it, it must be earned. He earned it by building trust into the friendships.
Someone once said to him that she was amused on how friendships could stand so long within the circle of his batchmate back to those days in Taiping. In a jest he
just said that we’re having the same “nasi kawah” and shares everyday of our entire 5 years there like brothers and sisters.
Well part of it was true he guesses, and the other part was hard to explain. It was unwritten anywhere, but for him, true friendships last because it was built on trust. Trust was the immortal foundation of a friendship that bonds the close-knitted relationship even closer.
When a friend stabbed him in the back, that was the last fucking straw for him. For once he did understand why the bugger did so but when the second and third came simultaneously, he blew his fucking top because he was so sick of the scheming behind his back.
Last fucking reminder from him: Do not ever cross path with him, for he’ll sure make that MF pays...
Posted by Saudagar Mimpi at 02:41

Dear blogger,
Correction, she wasn't 'amused'; for there's nothing amusing over such bond; she was (still is) 'AMAZED' - the friendship that formed somehow found it's way to be embedded in your lives...