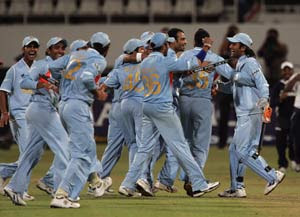 Vivacious India defeats Australia by 15 runsG Rajaraman (Sportz Interactive) Saturday, September 22, 2007 9:11:46 PM
Durban: Nobody dared move an inch from the edge of their seats at the Kingsmead Cricket Ground lest they miss any action and man, wasn't that some action in the ICC World Twenty20 semi-final! India held its nerve against a brave charge by Australia to win the spectacle by a handsome margin of 15 runs to set up a marketing man's dream – a final against Pakistan.And on Saturday, the Indian cricketers showed that they were brave hearts. First it was Yuvraj Singh and company with the bat as they powered India to 188 for five with 128 runs in the final 10 overs. Then Sreesanth and Harbhajan Singh who led the bowling attack with their calm demeanour to help India extend its stupendous showing and give itself the chance to win the top prize on Monday.
The Australians, as is their wont, were game for the challenge. Skipper Adam Gilchrist set the tone with his big hitting against Rudra Pratap Singh. And it was when Matthew Hayden and Andrew Symonds came together for a stand of 66 runs that the thousands of tricolour-waving fans fell quiet but Sreesanth delivered them from their agony.
Sreesanth was focussed on the task at hand and unmindful of the mayhem unleashed at the other end. He produced 140 kmph corkers to send back Gilchrist, and when he came back to bowl the crucial 15th over, Hayden. His spell of 4-1-12-2 will be etched in the minds of all those who watched it for its intensity and 16 dot balls!
Harbahajan Singh was control and variation personified as he brought in Test match quality bowling to the crease under pressure. The others like RP Singh, Irfan Pathan and even Joginder Sharma showcased an ability to take a beating and bounce back strongly. Each of them accounted for at least one over each.
You could reach out and touch the electricity in the air as a charged up Yuvraj Singh led an India resurgence to a comfortable 188 for five in 20 overs. For the second time in five nights, he creamed the opposition attack to make a breezy half-century. His knock of 70 off 30 deliveries (five fours and five sixes), coupled with spirited efforts by Robin Uthappa (34, 28 balls, one four, three sixes) and skipper Mahendra Singh Dhoni (36, 18 balls, four fours and a six) strengthened the dreams of thousands in the stadium and millions in the sub-continent – a juicy India-Pakistan final.
Before the start of the match, the question on top of everyone's mind was whether Yuvraj would be fit to play the game. The explosive left-hander had sat out of the match against South Africa with a sore elbow but he ruled himself fit to take on the Australians. And he engineered so much electricity in the atmosphere that the stadium lights could have been powered by that.
Yuvraj Singh walked in at the fall of Gautam Gambhir's wicket at 41 after the opener had made 24 but eight overs had already been played and Australia was on top of its game. He pulled the second ball he faced over square-leg and announced his intentions of leading an India fightback in a knock that reminded many of his innings against Australia in Nairobi back in 2000.
His clinical aggression negated the many dot balls that Uthappa was forced to play in his quest to ensure that India would not lose more wickets and come under additional pressure. India raced from 60 in the 10th over to finish with 188 – a whopping 128 runs in the second half of the innings. Yuvraj can take credit for giving direction to the 84-run stand with Uthappa.
Gilchrist, leading the side in Ricky Ponting's absence, and Stuart Clark – man of the match in the team's sensational win over Sri Lanka a couple of days ago challenged Yuvraj with a strong leg-side. The Indian vice-captain picked up the gauntlet and creamed the pace bowler for 20 runs, including a pulled six over mid-wicket and two fours over the cover fielder.
One thing became sure. T20 cricket is not for the weak-hearted. Not it if packs in so much excitement in one evening.
Australia Squad Adam Gilchrist (Captain and wicket-keeper), Matthew Hayden, Michael Clarke, Michael Hussey, Andrew Symonds, Brad Hodge, Brad Haddin, Brett Lee, Mitchell Johnson, Stuart Clark, Nathan Bracken.
India SquadVirender Sehwag, Gautam Gambhir, Robin Uthappa, Mahendra Singh Dhoni (Captain and wicket-keeper), Yuvraj Singh, Rohit Sharma, Irfan Pathan, Joginder Sharma, Harbhajan Singh, Rudra Pratap Singh, S Sreesanth
OfficialsChris Broad (match referee)Asad Rauf and Mark Benson (umpires)Billy Doctrove (third)Tony Hill (fourth) .
I managed to catch the India's innings last night and it is a totally remarkable innings indeed with their batsmen blazing away all the shots raining the ground with sixers. Though early in the pool matches the Indian side seems to be a bit struggling to keep on, but in the semis they've proved to the world that the "no fear cricket" adopted from their captain's tagline was pretty much worthy. So tomorrow will be the final which will see a face-off between 2 sub-continent nation, India against Pakistan and whenever these 2 nations meet the atmosphere will be choked with electrifying display by the players as well as from the supporters. So what can I say, sub-continent do rules the day...
News courtesy from http://www.worldtwenty20.com/, official website for ICC World Twenty20 2007.
Posted by Saudagar Mimpi at 09:36

I've been watching all the T20 matches with my wifey. It's a dream final btwn PAK and IND. The last T20 match they had, they're tied and the winner has to be decided by that really stupid bowl out. I'm the supporter of both teams (I have both team's replica ODI shirt), but when they come together like this, I'm into Pakistan. The new youngster capt Shoaib Malik has calm everyone. Shahid Afridi is useful more in his bowling than his batting blitz. Uncle Misbah's substituting Yusuf has been justified. But Yuvey the king of sixes (the tournament longest 119m sixes) will be worrysome.

Yeah as you said, the bowl-out decider is something that is unheard of. Instead the ICC should review the rules by using the bowl-out as the last resort to determine the better side at the end of the day. They could determine i.e which team gets the first wicket or which team has the less wickets. Anyway, it is better than using the toss of the coin...don't you think so???