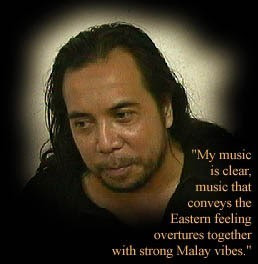 "The journey has been embedded for so long.
Deep full of mystery.
Take it while it's still alive..."
(Ramli Sarip)

Today's entry, I would like very much to pay my tribute to an icon, my icon Ramli Sarip. He is affectionately known as Papa Rock to most of us. His song has generate influence in most of us in his 40 years career span.

Ramli Bin Hj. Sarip was born on the 15 October 1952 in Singapore. He is now a legendary and popular singer also a producer in Malaysia.

He was first popular with his group called Sweet Charity in the late 70s. The band was formed in 1967. Sweet Charity was among the few bands that revolutionized the local rock scene. This Singapore based group continued to rock the nation with their brand of rock and roll music. They were once dubbed as the Deep Purple of Singapore. Sweet Charity released its self-title debut album in 1979. But it was not until a year later that they become a houshold name when their second album Sweet Charity-Pelarian released. Tracks from the album such as Kamelia, Musibah, Zakiah and Pelarian became instant hits and today, they've become Sweet Charity classics, so much so that fans has forgotten that some of the numbers were cover versions and that includes the most notable Eric Clapton's Wonderful Tonight entitle "DIA" from the album Penunggu.

Indeed, Ramli Sarip was the backbone of Sweet Charity. From 1989 onwards he went solo and to date has cut 8 solo albums with an average sale of 100,000 original copies per album. He also proved himself to be popular among fans ranging from youngster, teenagers, middle aged and the elderly. He renders heavy rock, soft music, traditional Malay songs and English numbers. He is always occupied with road show, dinner shows and charity shows. Ramli Sarip also manages to win the hearts of non-Malay fans through his performances in pubs and clubs.