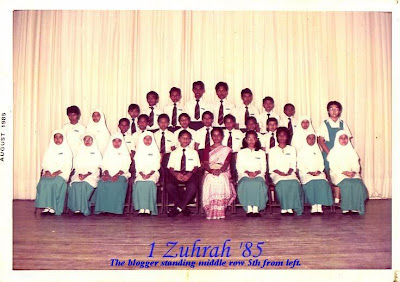 During my primary years, whenever I got a slapping from a teacher it's a no-no way of me for telling my late abah of the punishment since I'm fully aware for that I surely will receive a double slapping from him for he knew that I'm the one to blame, not the teachers.When I was in my secondary years in a boarding school. Me and a few of my brothers in arm were caught smoking by the warden. As a lesson for us, we were given 3 strokes each on our behind and still not satisfied with the punishment the warden decides to get us all wet by soaking us all for the night in the pool. Was it filthy? Of course it was and still is to this day. Imagine spending the whole night standing in the murky water with the bloodsucking leeches to keep us company. Did we learn our lesson? Frankly no and it never crossed our mind of becoming holy back than. But did we, did I respect the teachers? Yeahhh you can bet on that, never in my/our mind to disrespect the person that had taught us and the feeling remains till this day.

I remember during my school days at SERATAS Taiping when it comes to Saturday night, all the Putras and Putris would flock to the gymnasium to watch movie screening by the Kelab Wayang Gambar. Sometimes if weather permits they will screen in on the wall of the school block and everyone will sit down on the tarmac between the Dewan Besar and the school block to catch whatever movie for that certain night and of course as usual attendance is compulsory. Many would bring "products" such as kacang, biscuits and air minum just like in the movie theater. Some would even bring pillows and tikars so that they can lie down and even sleep during the screening. Sometimes during the screening a few of the boys (the seniors) would slowly crawled in the dark to be amongst the Putris just to hear their suprised scream finding that there're different species sitting beside them. As usual no harms were done except for some boos and cheers from both sides.

There is one place that is sacred to me during those days, that is the Dewan Makan. You see, during the starts of each first school term (form 4 and 5, my senior years of course) I would influenced the AJK Dewan Makan to arrange my batch seating so that we'll always be near the girls in the dining hall (AJK semua kawan kamceng maaa...). Not knowing to them, within the half and hour of dining I would cherished that moment by curi-curi pandang/jeling/intai­ my awek (everybody experienced their first love apa...) sebab come to the real world like most boys, being cool is such an important image to look after rather than being a Mat Bunga. Although our relationship is an open secret to most of the school population, tapi biasala gua nak jaga air muka depan member-member dan juniors kenala buat macam takdak apa-apa. Nanti depa kata, apala abang ni gaya macam rock tapi main awek pulak kahkahkah...

There's one incident on ber"couple" (lelaki dengan pompuan la...) happened to 5 of my buddies, I don't know exactly how it goes but verbal accounts dari yang empunya diri tu, they were caught coupling by the Dicipline Master that means berdating dalam kelas kot?? They were brought to the Bilik Guru to face the music and unlucky for them that at that time it was waktu rehat. You can imagine that most of the teachers were there right? So, here goes the sedutan dialogue;

Up til now whenever I met with A. Salleh, I would always asked him to ulang balik the dialogues word by word hahahaha... So, what about me? Do I have that similar kind of unfortunate incident happens to me? Glad you ask and it did happened but on a more greater scale and if you boys and girls be nice to this old boy, perhaps for the next entry I will reveal my infamous tale...

Remember days of skipping school
Racing cars and being cool
With a six pack and a radio
We didn't need no place to go...
(Bon Jovi: Never Say Goodbye)
Posted by Saudagar Mimpi at 08:28

u made me lough when reading your stories.. reminds me of the sweet (or maybe bitter) and invalueable memories while in SERATAS, good job, bro..

To this day all the bitter part of it had morphed into a sweet memory don't you think so??