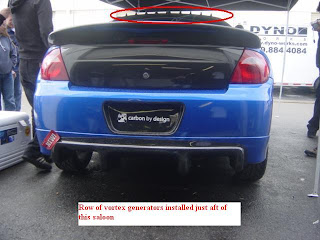 Ever seen cars with row of these little fins installed at the rear of the roof just above the rear windshield? Well, these little fins are called vortex generator and in general it main purpose is to streamline the airflows. It seems like nowadays, it is some kind of a trend for car owners to fit in these aftermarket device to their cars in the hope of getting more efficient perfomance from their vehicles.

Now, let us move on to what is vortex generator? A vortex generator is an aerodynamic surface, consisting of a small vane that creates a vortex. They can be found in many devices, but the term is most often used in aircraft design.


Vortex generators are added to the leading edge of a swept wing in order to maintain steady airflow over the control surfaces at the rear of the wing. They are typically rectangular or triangular, tall enough to protrude above the boundary layer, and run in spanwise lines near the thickest part of the wing. They can be seen on the wings and vertical tails of many airliners. Vortex generators are positioned in such a way that they have an angle of attack with respect to the local airflow.


A vortex generator creates a tip vortex which draws energetic, rapidly-moving air from outside the slow-moving boundary layer into contact with the aircraft skin. The boundary layer normally thickens as it moves along the aircraft surface, reducing the effectiveness of trailing-edge control surfaces; vortex generators can be used to remedy this problem, among others, by re-energizing the boundary layer. Vortex generators delay flow separation and aerodynamic stalling; they improve the effectiveness of control surfaces (e.g Embraer 170 and Symphony SA-160); and, for swept-wing transonic designs, they alleviate potential shock-stall problems (e.g. Harrier, Blackburn Buccaneer, Gloster Javelin).


Many aircraft carry vane vortex generators from time of manufacture, but there are also after-market suppliers who sell VG kits to improve the STOL performance of some light aircraft.


Air jet vortex generators work on a different principle. They direct a jet of air into the boundary layer, thereby re-energising it.


So, in reality these little simple device are not going to improve whatever perfomance you guys out there were thinking of, unless if you are driving a car which can fly that has a speed that is the same as a Boeing 737, let say about 500 to 800 kmh. Even perfomance cars didn't have these devices fitted to their chassis when they were rolled out from the assembly plant.

i know what that stuff is...i would say that it looks stupid on car.looks so keling!

Hahaha Bad, you should know better since you have a degree in aeronautical engineering. What about those who just follow the trend? Kadang2 memang terasa lawak they would fall for that. In theory memang function benda tu betoi tapi bukan boh kat kereta la...

Unfortunately, that Mr (or Ms) Anonymous up there is not me, the guy with Aerospace degree from a 500-year university, who also loves to slog all cricket balls.

Anyway, I do agree with him (or her) that no matter how the vortex generator could creates a tip vortex which draws energetic, rapidly-moving air from outside the slow-moving boundary layer into contact with the aircraft skin, which would make the boundary layer normally thickens as it moves along the aircraft surface, reducing the effectiveness of trailing-edge control surfaces and re-energizing the boundary layer, delays flow separation and aerodynamic stalling as well as improve the effectiveness of control surfaces, improved burning of the fuel, increasing horsepower and fuel efficiency....but really looks so 'Kap La Ya Nga'.

Ayoyoyoyo...really ka brader, I thought it was you... Anyway Bad, please send me link/links to your blog. I might as well add yours in my page...