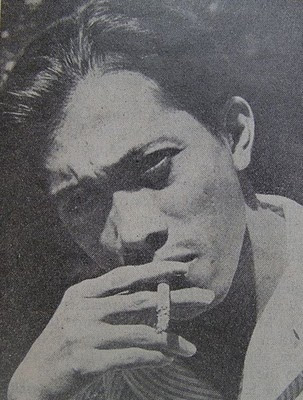 I’m writing again and yes I can’t sleep and it has been quite a while since I had both things coming into my life.
Some writes because it is what they do, some because they’re enjoying it but me, I write or tried to just because there were so much and so many things in my thought that circling non-stop as if there were voices telling me to pour it all out. Pour it all out in letters that will become words, words that will become sentences with commas and dots.
I was never good in essay during my school days and will never be good in it ever. Even with this entry, there is nothing specific about it. I'll just write.
Once not too long ago, I’ve met a songwriter that used to penned down songs for a popular rock band during the 80’s and I asked him why did he never make more songs nowadays since he has the touch in making beautiful songs that can lasted decades if not centuries. Even now his songs were the basic learning songs played by any rockers wannabe in the country just like Paranoid by Black Sabbath and Highway Star by the legendary Deep Purple during my times.
His answer was simple, “Those times I was so poor and miserable without foods to eat, without love to live for and full of miseries. My life was so pathetic that ideas of jotting down the pain and sorrow just came rushing through my veins...", and with that great songs were born.
Yes, great laureates and great poets lead a sad life. Take Chairil Anwar from Indonesia. He was a great man in literature but his life was full of tormented journeys till the day he died. Sometimes it was from their excessive negative lifestyles but it all started because once they lost something. But it was the pain and agony that keeps them moving.
Perhaps we both have something in common. Sadness gives us the adrenaline pleasure that drives us with stupid imaginations and doings beyond the thinking of any rational minds...
Posted by Saudagar Mimpi at 02:01