...howwwzattt for the bad boy of cricket??? 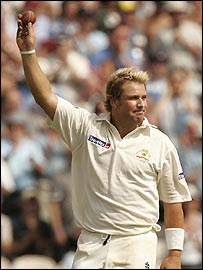 CANBERRA, Jan 17 (Reuters) - Australian test cricket great Shane Warne has been caught out by another text message on the first day of his new career as a poker professional.

Warne, who retired from test cricket last year with a record 708 wickets, was given a five minute penalty for sending a text message during a poker game while taking part on Wednesday in the Aussie Millions tournament in Melbourne.

Warne's marriage broke down over a series of text messages scandals involving other women.

A spokeswoman for the Crown Casino, where the tournament is taking place, said a penalty could have cost Warne money as other players continued playing.

Texting is a common infraction by gamblers. "It happens all the time. It's just that it was Shane Warne," she said.

Warne has signed with online poker company 888.com to play the World Series of Poker, won by his Australian poker mentor Joe Hachem in 2005.

During his controversial career Warne was suspended for passing tips to an Indian bookmaker and served a ban for testing positive to a prohibited diuretic.

(Reporting by Rob Taylor; Editing by Alex Richardson)
Posted by Saudagar Mimpi at 12:48